Last night was the first lunar eclipse that occured on the winter solstice,  in 372 years.  The earth aligned between the full moon and the sun, causing a shadow on the moon.
It was supposed to take 72 minutes from start to finish, so I knew I had a long window.  We intended to wake up and try to get some pictures....but it was pretty cold.  I set the alarm for 2:20 am.  When it went off, we were snug in our warm bed with the electric blanket on.  Did we really care?  Couldn't I just look at the pictures on the internet?  Was it really such a big deal?
After trying to justify staying in my warm bed,  I decided to just go peek out the window to see if I could see the moon.  I couldn't, and finally decided to go outside.  It wasn't that cold outside and we didn't freeze.
The moon was mostly covered by the  shadow.  It looked a little orange.  I think because of the shadow, it didn't allow me to get a clear shot if I zoomed in nearly all the way.  I had to back off the zoom in order to get some clear shots.

Here is what we saw.  The moon was almost totally covered by the shadow. 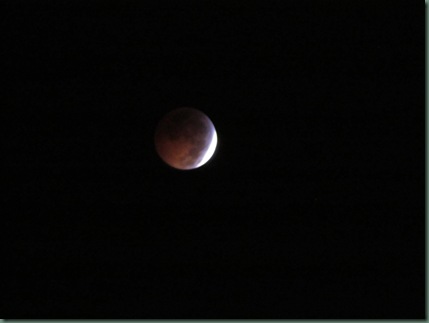 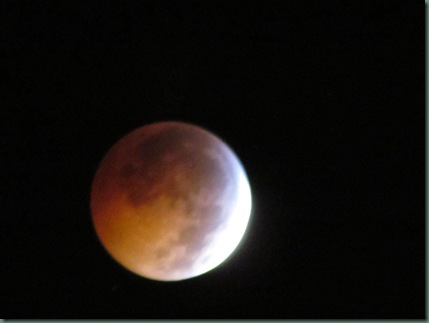 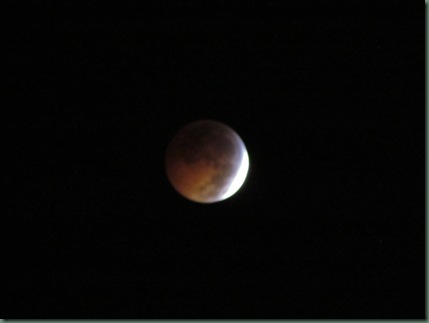 We had another interesting day yesterday.  Interesting…not fun.  We were sitting inside drinking our morning coffee, when Mom called and said our friend Bobbie (our old neighbor) was having some problems with her blood pressure dropping.  Bobbie wanted to go to the doctor but would not consider calling an ambulance.  We didn’t know how bad she was at that time.  She normally gets her medical care at the base (McDill AFB) and doesn’t have a doctor nearby.  We ended up taking her to a walk-in clinic where there were all sorts of sick people hacking, groaning and snorting, grunting and wailing.  Painted a pretty picture, didn’t I?  Bobbie, who is 86 and badly stooped over started feeling bad the night before when she was standing on a ladder cleaning out her kitchen cabinets!  I tried to explain to her why that is a bad idea, but she’s not going to stop.  One day she will fall and lay on the floor a day or two until someone finds her.  Anyway, we got her to the clinic, called her daughter and then went back home to shower.  The doctor lowered her blood pressure medicine and she appears to be okay.    Mom insisted on going there with us and I didn’t want her in that hazardous waste dump any longer than necessary, so we left Bobbie in the care of her daughter.  They had an argument the night before and Bobbie didn’t want us to call her daughter….but I did :)
We managed to finish up our very limited Christmas shopping yesterday.  We took Mom out to get a few things and get her out of the house.  It seems to help her if she doesn’t stay home all day and think about her problems.  It was a pretty sunny day and warm enough to just wear a long sleeve shirt.
We’re sitting here watching the golfers, Sandhill Cranes and the deer.
Hopefully we’ll be able to get over to the beach the next few days.  Our Christmas tradition the past few years is to head over to Fort DeSoto Christmas morning.  It’s  a beautiful beach/campground right on the Gulf of Mexico and is often rated as the best beach in the country.  We like to see the  Rosette Spoonbills and White Pelicans there.
at 8:55 AM