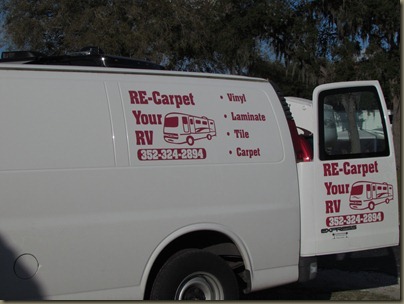 Eric and his helper Dale arrived at 9am yesterday morning to replace our front carpeting with Allure Ultra vinyl flooring.  We chose “clear cherry” for our color.  This Allure flooring is different from the old style Allure with the glue tabs to hold them together.  These planks have a tongue and groove locking system and they are completely waterproof.  Not a bad idea on a motor home.

Allure is made of a heavy duty vinyl.  We chose this over a laminate because it won’t hurt it if it gets wet.

Our motor home had carpeting in the front living area, then  ceramic tile in the middle area.  The rear bedroom area is carpeted.

We decided to just get the front carpeting replaced yesterday and when we get back from the Keys, have him do the bedroom area.

A few days before the replacement, I started to get cold feet about Eric.  I had never actually seen his work.  I had only gotten information on him from the internet.  I e-mailed someone who had used him and was satisfied, but I started to wonder…was he as fussy as I am?

I decided I would just watch him like a hawk and make sure he did the work the way I wanted it done.

Once they started, it wasn’t long before I realized I wouldn’t need to worry.

Eric was very professional and did things right.  He was meticulous with everything he did, being careful not to damage anything in the process.

Eric worked like a dog all day, but always knew where and what his helper Dale was doing.  I liked that.

I relaxed after about 10 minutes.  I knew he’d be careful of our home and do the job the correct way.

Here is a “before” picture. 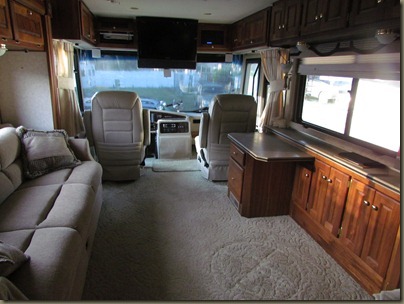 We had already moved the recliner. You can see where it sat.  The carpet wasn’t in bad shape.  No bad wear or stains.

He took out the captains chairs, the sofa, the cover around the steering wheel and the center console area up front.   The Allure went underneath things for the most part so very little trim was needed. 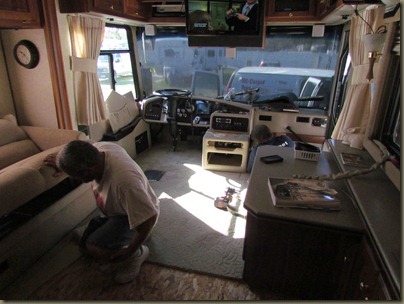 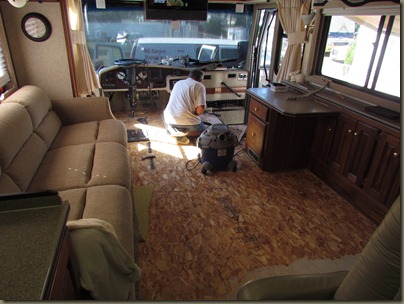 This next picture shows where he removed the center console. 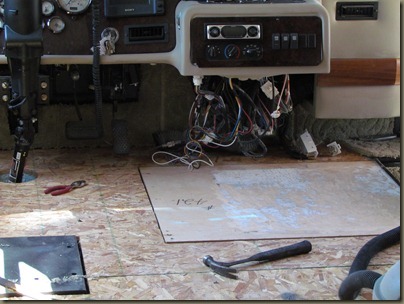 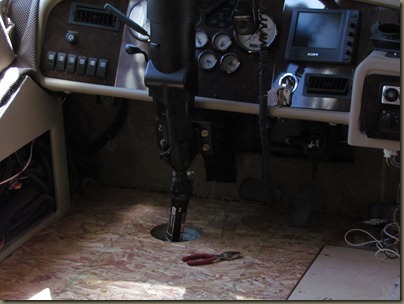 Finally some Allure was down. 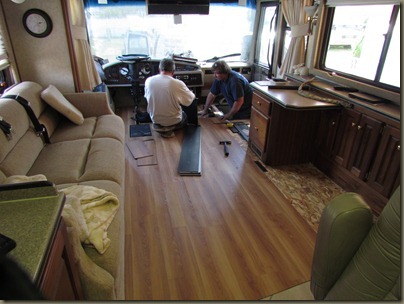 We left the carpet underneath the couch.  No problem since it can’t be seen.  Eric said there are a issues trying to replace that carpet. 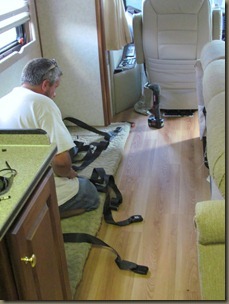 Here is Baxter’s first look at the finished product.  He came running out and immediately slid down the floor.   Darn that new floor is slippery Mom! 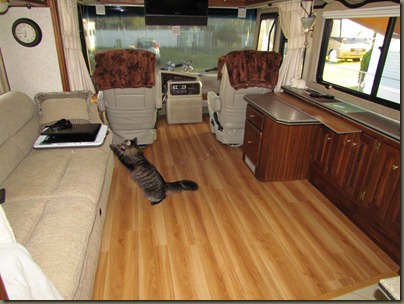 The trim around the cabinets and everything was done perfectly. 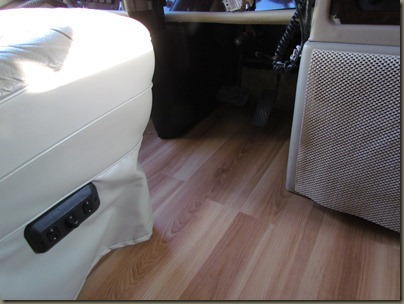 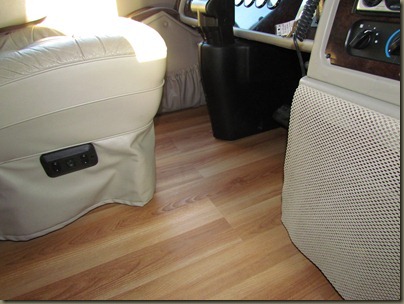 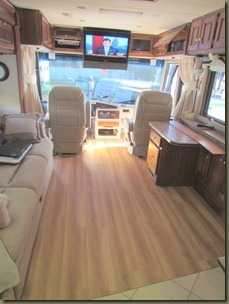 We’re happy with our new flooring and I would definitely recommend Eric.  He does not have a website (I told him he needed to get one).

He is based out of central Florida and will travel to you.  He doesn’t mind you being in the rv while he works.   If you want to use him, keep in mind he is just one person and is extremely busy during the winter months.  In fact he says he’s booked through April.  This week, he did another motor home Monday and Tuesday, ours Wednesday, and two more this week.

Here is his number:

He installs vinyl, laminate or carpeting.

Some questions that some of you wanted me to ask him.

Yes, he can replace the carpeting on gassers “dog house.”

No, he doesn’t install heated flooring.  He said there are strips you get and you install the flooring over them.  He gets plenty of business just doing what he does and has no need to specialize.

He does NOT remove old ceramic tile.

Eric and Dale worked  until 6:30 pm with no breaks or even lunch!

Let me tell you.   I was one tired girl when they left.