Unlike the rest of Florida, the Keys have been pretty dry and sunny this winter, which is okay with me.   We have noticed it was a little cooler here than previous winters, but certainly not cold.   The grass had started looking  brown and rain was definitely needed here.

The last front that moved through Florida and caused all the flooding in the panhandle, finally reached us and brought us a decent amount of rain.  We sure needed it.

Last week we had 4-5 days of really hot weather.  When you’d open the door to the motor home, the heat would almost knock you out.  It made us lazy. We had hoped for a trip into Key West for sunset, but the heat seemed to tire us out, so we haven’t made it yet.   It might be next year before we get back down there.

The stifling heat is gone and it’s now just “regular”  hot.  Fortunately, most of the time there is a nice breeze at our campsite, so we enjoy sitting outside in the late afternoons and evenings.

Most of our neighbors have headed back up north to their summer homes, so the block is getting pretty quiet.  One of our neighbors has a little rental on the canal across the street from us and has offered to let us keep our boat there.  Since we haven’t had the boat out for a while, we haven’t yet taken advantage of their offer, but it sure would be nice to keep the boat in the water.  Thanks Rosalee and John!

Al didn’t feel well for a few days, so we stayed pretty close to home.

He felt well enough for happy hour though, so we went to Springers last night.  It’s one of our favorites and is popular with the locals.  It’s the place where we met the woman who told us about finding all the “square grouper.”

When we walked in the door last night, the place was crazy, and people had on strange hats.    Oh yeah…..it was Derby Day and they celebrated it Keys Style.   You should have seen the hats.  One was a buoy like the one we have hung as a decoration in the picture below. 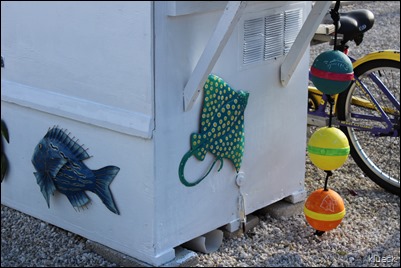 These buoys are used to mark lobster and crab traps.  The guy last night had one mounted to a helmet style hat.  It was definitely a Keys style derby hat.

Al wanted me to take some pictures, but I didn’t want to look like a tourist!

One woman had on a hat that was more typical of the Kentucky Derby. It was covered with small roses.  When we walked in hatless, she took pity on me and gave me a couple roses!   I put them behind my ears and we joined in the festivities.

We met a couple who are staying in Bahia Honda State Park.  They come to the Keys often and always stay in the state parks.  I asked how they managed to get reservations and she told me her “secret.”  I still can’t quite figure it out though!   I guess I don’t really need to worry about it anymore though.

Although we haven’t gotten back out to Looe Key Reef, I wanted to add some more snapshots from the videos that I took.

My little Intova Underwater camera takes videos and still photos.  I found it easier to use it on video mode, since the viewfinder is so small and I really couldn’t compose any pictures anyway.

These next ones are of the giant 300 pound Jewfish aka Goliath Grouper.  He was so sweet. 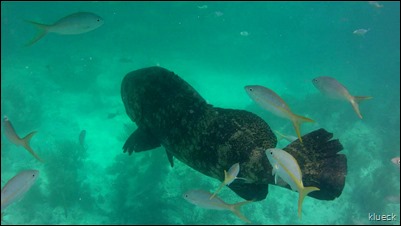 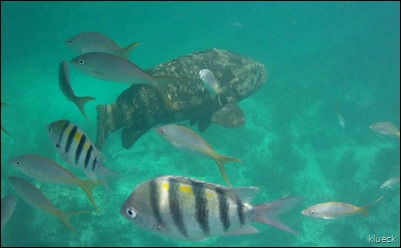 You can see how big he is when you compare him to the bottom of our boat. 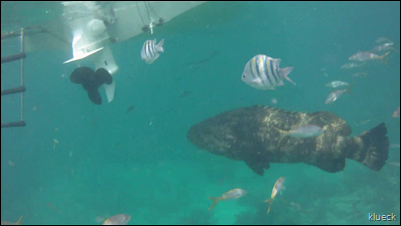 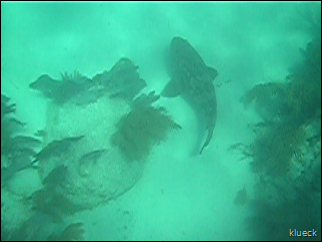 The next one is of a parrotfish. This is the fish that “smiles” at you.  I am not at the correct angle though, and much of his vibrant green and red colors has been absorbed by the water column. 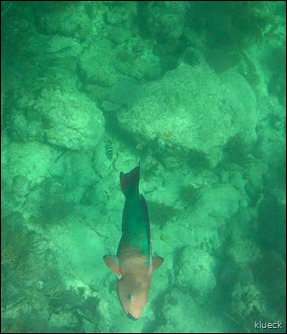 When you look at objects in the water, your eyes can see the colors better than the camera lens, but the deeper you go, and the more water between you and your subject, the more color you will lose.

These pictures I took of Looe Key were taken without a strobe, so much of the color was lost in the picture, although I could see them with my eyes.

The following is part of an article I read about how colors are absorbed in water.

Water absorbs different wavelengths of light to different degrees. The longest wavelengths, with the lowest energy, are absorbed first. Red is the first to be absorbed, followed by orange & yellow. The colors disappear underwater in the same order as they appear in the color spectrum.

Even water at 5ft depth will have a noticeable loss of red.

At what depth underwater does color disappear?

I’m hoping to find a better underwater camera by next year.  They have certainly changed a lot since I last used a 35mm film underwater camera!  I have a lot of research to do, since I don’t want to spend a fortune.

Not sure what today will bring.  Anchor hunting? Looe Key Reef? Fishing?  Being Lazy?

And last but certainly not least, here is a recent picture of Mr. Baxter. 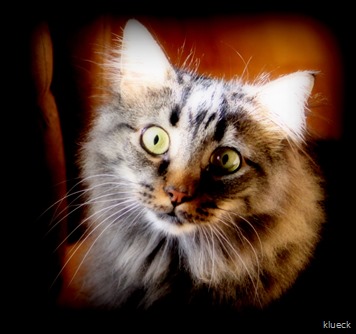