We loaded the kayaks up onto the roof racks of the truck and headed down towards Big Pine Key.   The winds were down in the morning, but by noon, they had started to pick up.  We really need to get started earlier!

Our plan was to find a nice little beach area close to the road, where we could launch the kayaks then sit under a nice shade tree to have our lunch and read a little.

Unfortunately, the place Al wanted to go was not real close to the road, so we had haul the kayaks to the water on the kayak cart.

He had heard this particular area was rocky and we might find some lobsters there.  Lobster season ends March 31st, so we have to get busy!

We had just started our paddle, and were only in about 18 inches of water when Al  spotted a sting ray, then a minute later he saw a small shark.  Al kept seeing the shark all afternoon, but I only got one really good look at it.   I never got a chance to get a picture, unfortunately.  We’re not sure what kind of shark it was.  It appeared black from the surface with a wide head area (not a hammerhead).  We’re  used to seeing sharks while diving, but not from above, so we couldn’t identify it.  I need a good shark book, I guess.  I did read that they sometimes come in close to shore to lay their eggs, or give birth.

I did a little research and found that about 30% of sharks lay eggs and 70% give birth to live sharks.

Here is a picture I borrowed from the internet of a shark egg casing with a baby shark inside. 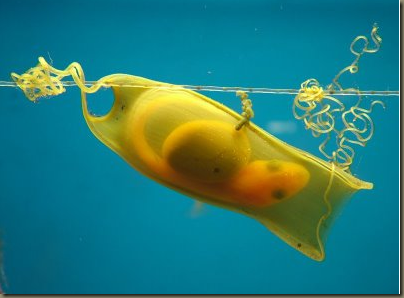 And another picture I borrowed of a live birth. 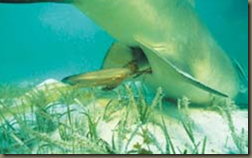 The water was crystal clear and the bottom rocky.  It was a great place to kayak and snorkel, but the darn wind made it difficult to kayak.  Every time I put down my paddle to snap a picture, I lost ground and had to paddle like crazy to get back to were I had been.  The further offshore we got the windier and rougher it got.  We hope to get back there and do some snorkeling and more paddling on a calmer day.

We saw several conch shells.  Here is Al showing me one. 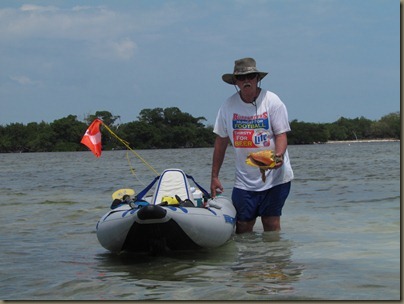 He found it easier to walk around than to fight the wind and paddle.   You can see how shallow the water was. 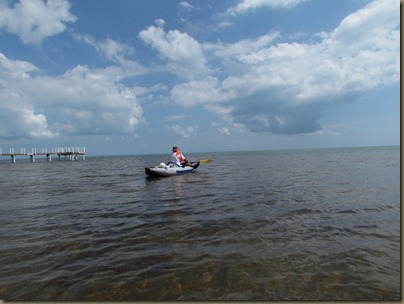 On that dock in the above picture, sat a handsome fella. 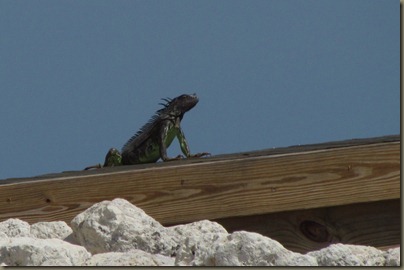 There are lots of Iguana’s here in the Keys.

The next picture is a beautiful sea grapes bush. 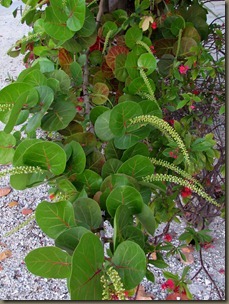 I think they are so pretty when the leaves start turning red. 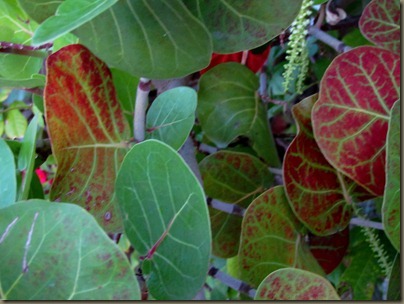 On our evening sunset walk, Al spotted a bird (Grackle) floating alive in the water by the marina.  He couldn’t reach him, so we found someone to loan us a big net.  Al finally fished the little half drowned bird out of the water.  We left it in the net so that we didn’t scare it to death.  He was alive when we left him.  We’re hoping he was able to fly away.  The guy who gave us the net was going to check on him.  I want to think he was going to be okay.   Okay…that’s two rescues in two days….par for the course! 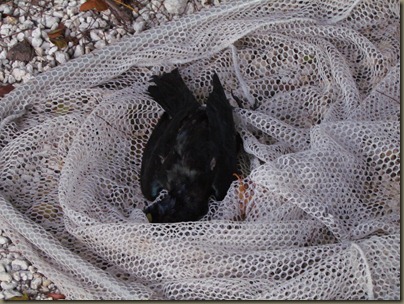 We have sure been enjoying the nice ocean breezes at night.  We have to run the a/c during the day, but at night we sure enjoy the tropical sea breezes.  It makes for some great sleeping!   It’s supposed to be windy again today, and then calming down tomorrow.  March is known for being windy, so we’re not complaining.  It keeps the temperatures down.  It sure feels tropical here now….so much different than the mainland of Florida.

Mr. Baxter got weighed yesterday.  He is now 11 pounds….up half pound from about 2 weeks ago……uh oh.  He will be  8 months old the first of April.