We decided to change our plans for our stay in Florida.  We had reservations at Hillsborough River State Park, which is one of our favorite campgrounds in the area.  We decided to head south about a week earlier so we still needed a place to stay from the 12th through the 20th.  Campgrounds get pretty booked in Florida in the winter, so we decided we'd better get something going.

We decided to cancel our previous plans and stay the entire time at Silver Dollar Resort in Odessa, Florida.  It's only about 7-8 miles from my Mom's house and closer to the Gulf.  Mom has been having some health issues, so we felt this would be better since it's close to her house.  That way she can easily come visit us and vice versa.  It's a little pricey, but it was the cheapest we found.  The rates are $23 a night, but then you have to add the $48 resort fee and the 11% Florida taxes and resort fees.  That's why Florida is so cheap for residents as far as vehicle registration...they get the tourists!

Silver Dollar Resort only has about 25 rv sites now as most of the sites have been purchased and mobile homes have been put on them.  Evidently it was bought by a large company a few years ago.  I think we'll be happy though. It's a pretty place and very close to to the Gulf.  They have big trap and skeet tournaments there frequently and one is ending on the 12th.  We were concerned about the noise scaring the cats, but we'll be on the other side of the road, so hopefully there won't be too much noise.  Here is a satellite picture of the resort.  We've driven through it before and liked it, but not for a while.  I hope we'll be happy there. Hey, what am I talking about...we're always happy when we're in the motor home! 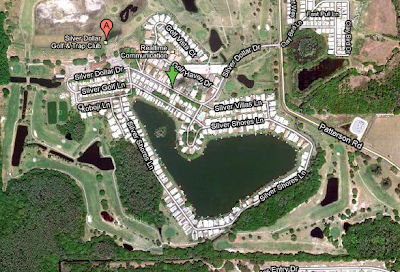 We worked on packing up the motor home yesterday and getting things organized around here. We are planning on leaving Thursday, but we have so much to do, I don't know if we'll make it or not :)

Unfortunately the weather is not cooperating.  We have a cold front and we're supposed to get into the low 20's tonight.  It would be easier is we could just move up to the motor home, but with the cold temps, we'd have to run the propane for heat and we don't want to burn up all our propane.

We're getting down to the wire!   I wish I could say that it will be nice and warm in Tampa, but the cold front has reached all the way down to central Florida too!