One of our neighbors here has been here a month and fishes every day.  He’s the one that gave Al some fishing advice and a lure. Yesterday, he was kind enough to give us some fresh trout he caught.  He even filleted it for us!  How nice was that?  We had never had ocean Trout before so we fried it up and found it was delicious!  Yumm…fresh fish sandwiches!

We have found the people in Keaton Beach to be extremely nice.  When you walk down the “strip” any cars that come by  “give you the finger”.  This “finger” is like we get in Georgia, but not like the one we used to get regularly in Tampa.  This one is the forefinger and it is raised in greeting.  Everywhere you go, someone strikes up a conversation.   We think this must be what full time rv living is like.  We always hear from fulltimers how friendly the people are, but we haven’t really experienced it much, until this trip.  We think it is because we usually camp at state parks and those people are mostly week-end warriors, trying to get the most of their short week-ends and vacation time available.

Al spent a few hours on Thursday in the kayak trying out his new non-resident Florida fishing license.  It cost $47 for the year.  All the years we lived in Florida don’t count, so he had to pay the non resident rate….

Evidently his reel broke so he wasn’t able to get any fish.  I think that’s why the neighbor gave us the trout…felt sorry for us!  Hey, whatever works :)

We decided to go find some treasure Friday morning.  I logged onto Geocaching.com, put in Keaton Beach, Florida and it gave me a list of treasures near here.  For those who have never done any Geo-Caching, it is basically a treasure hunt using your GPS.  We find it a great way to find out interesting places in new areas. We looked for 2 caches, and found the first one easily, but the 2nd one eluded us.

Friday turned out to be pretty cloudy all day and it rained some last night.  We still have a leak on the bedroom slide, but the living room slide didn’t leak.  That could either be because the water was running away from the seal or because we got the leak fixed.  I am hoping a little more caulk will stop the bedroom slide from leaking.

Yesterday afternoon another MH just like ours pulled in.  The only difference was it was one year newer.  Of course we got to talking to the owners and compared MH’s.  He is a handyman type and Al checked out his LCD tv mount.  He used the exact same bracket we have and so we were able to see exactly how it would look, plus how he mounted it.  I think our tv is a little larger, but it gives us a good idea.  He showed us how he mounted a bracket in an outside bin so he could put a small tv outside.  He ran electric around underneath the coach to supply power.  Al pointed out to him that there was already an outlet there!  He could have just plugged it in :)  It’s a little hidden, which is why he didn’t see it.

The campground is full.  Most of the campsites house permanent rv’s and the people just come for the week-ends.  I think there are only about 5 sites that you can reserve and those are on the water.  We found most of the regulars are from Georgia, so of course they are all extremely nice!  Georgia is a friendly state!  Most are fisherman, so there wasn’t much activity last night.

Here are a few more pictures we took yesterday.

This is the main (only) drag. 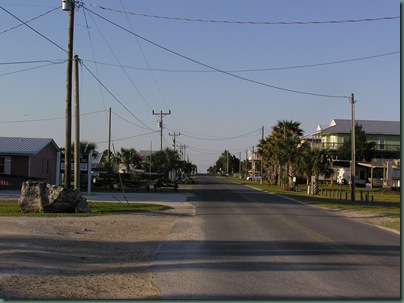 There is one restaurant, called the Hot Dog Stand.  They serve fresh fish and is supposed to be excellent. 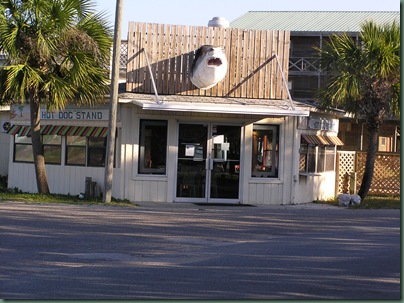 These scallop shells are what is in the water in front of our beach.  Scallop season starts in July and is supposed to be very popular.  We’ve used to go scalloping in Tampa many years ago.  You just use a mask and snorkel and search around for them in the grassy areas.  It’s kind of fun…searching for treasure!  These shells are all dead..no meat inside. 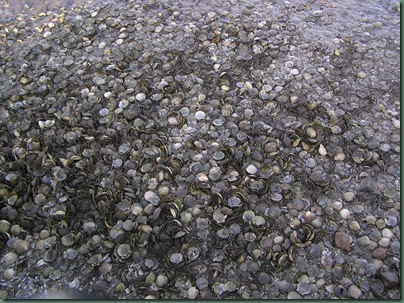 Here is our view during low tide. You can see the oyster bars.  Hopefully the big oil spill won’t come here and kill all the oysters and scallops, and birds, fish, and everything else :(

This is bird nesting season and many seabirds build their nests right on the ground.  Oil coming onshore would kill a lot of marine life. 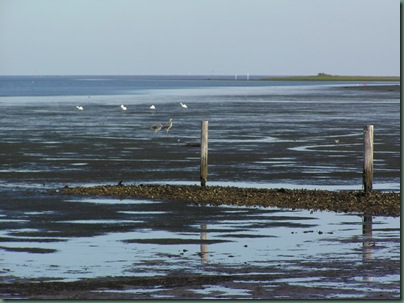 A view of our MH and campsite.  The water is in front.  We are the only MH that parked facing the water.  The others all backed in, which makes no sense to us.  You have a million dollar view, why would you give that up?  Of course the connections are set up for backing in, but we just ran an extension cord and an extra water hose.  The sewer was a little bit of a problem, so we’re just using a gray water garden hose to drain the grey tank and we’ll dump the black before we go. 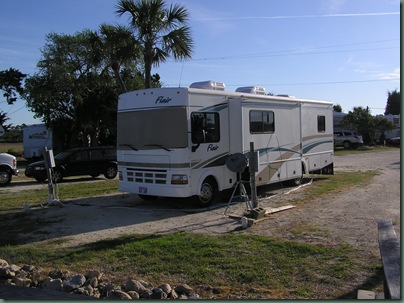 Here is a view out our front window. 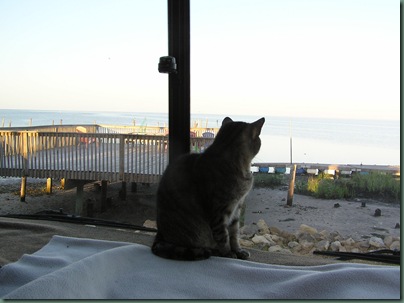 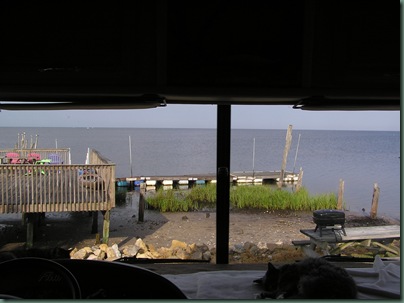 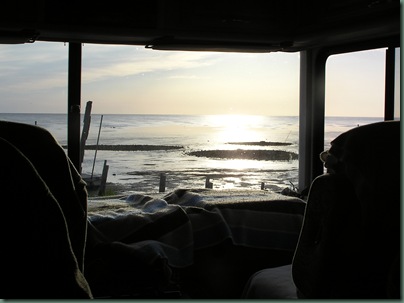 Now, here is a view from the back window.   No comparison. 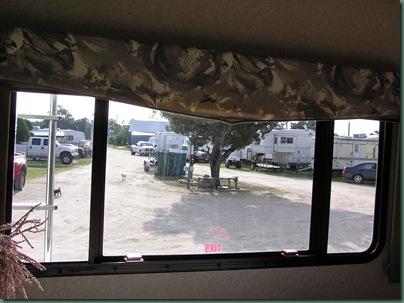 Last night we were settled in watching “Friday Night Lights” on our Roku/Netflix.  We found it worked okay with the wifi here at the campground.  Anyway , my cell phone rang and it was a woman I used to work with at State Farm.  We had exchanged emails yesterday and I told her where we were.  It turns out they had been planning a trip to Keaton Beach to look at a boat, so they stopped in to say hello.

Today (Saturday) is a big fishing tournament and the weigh in in across the street.  It should be interesting.  The top prize is $3000.

That reminds me… the people who have the MH just like ours told Al that a few years ago they won the Fantasy Five lottery drawing and got $75,000 after taxes!  How cool would that be?  That’s where they got their MH!  They seem like hardworking people that deserve a bit of a break!  Gotta go buy some more tickets!

Here are just a few more photos of this area. 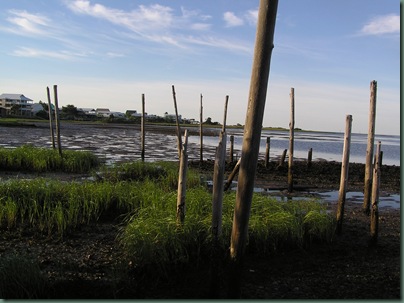 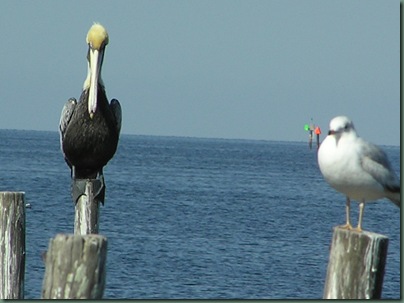 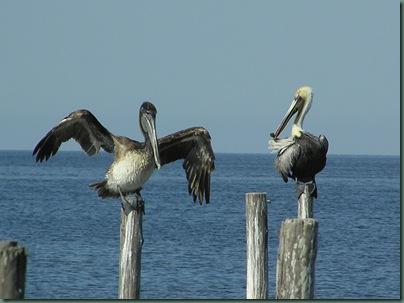 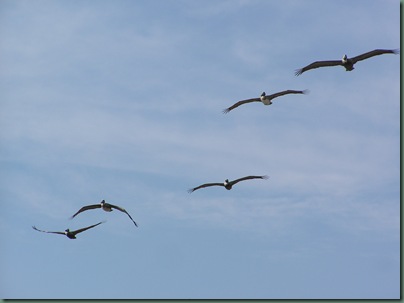 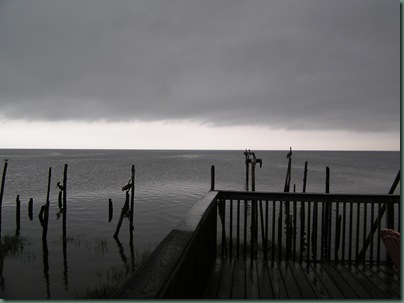 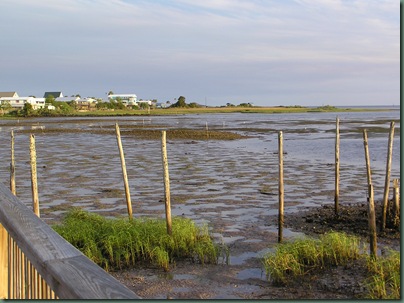 Here is Squeaky on her new “Bed in a Box.” 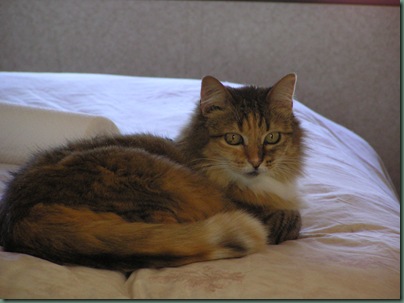 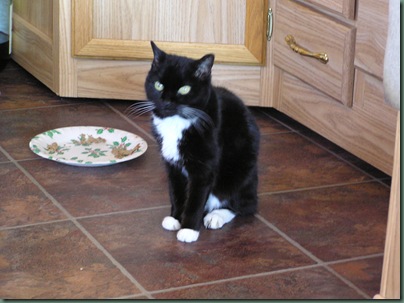 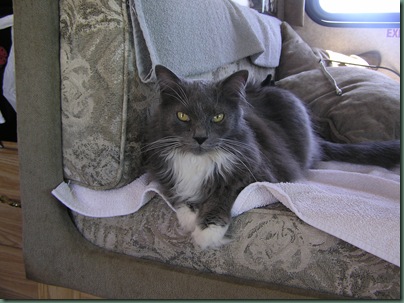