Yesterday was the last launch of the Atlantis Space Shuttle,  and I was hoping to be able to see it.

We are approximately 200 (as the crow flies)  miles away from Cape Canaveral.  We could see them from our house in Tampa, but I wasn't sure we would still be able to see it here in south Georgia.

This was to be the last launch for the Atlantis. There will be one more for the Endeavor and one more for Discovery, but then the space shuttle program will be finished.

We actually went to the Cape a few years ago and watched a launch.  It was great, however the traffic was horrible.  After the launch, it took us two hours to move 2 miles!  That was before our camping days.  It would have been nice to have the RV there and just stay put for a few days.

Anyway, when I walked outside and looked toward the direction it would be coming from, all I saw was large puffy clouds.  I didn't think there was much of a chance of seeing it, but I stayed outside, camera in hand.

A little while later I saw a fast moving trail across the sky and I assume that was the shuttle.  It was moving very quickly.  It appeared to be going in a southwesterly direction. That surprised me as I thought they usually went straight up.  I suppose I could have been seeing a jet, but I don't recall seeing a jet moving quite that fast.

At one point I saw a flash of something white on the actual space craft.  I learned later that a few minutes into the launch they do a "roll to heads up."  I appears to be where the shuttle flips over and that may have been what I saw.  That was pretty cool.

I was trying to find a website showing the path over land the shuttle took, but was unable to.  I wanted to confirm whether or not I was actually looking at the shuttle.

These are the photos of what I believe to be the shuttle. It stayed in my field of view for quite a while.  I didn't see it at lower altitude,  due to the clouds. 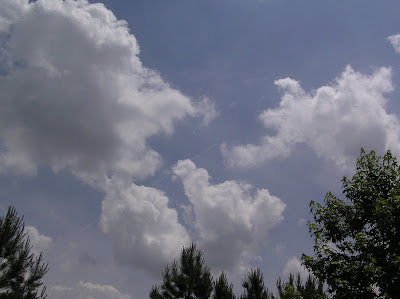 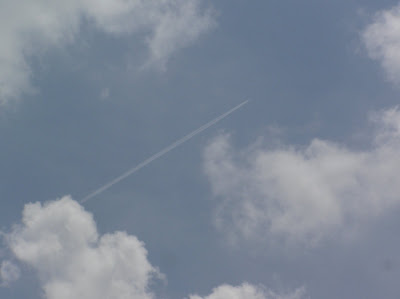 
I kept wondering if those poor guys in the London Bus Camper had survived the heat long enough to be able to watch the launch.  Since they came from London to watch it (along with their bus), I certainly hope so!
at 9:23 AM