One Down, One to Go!

Well, we finally caught Ms. Dolly Parton.  The poor thing must have thought we were going to kill her, after all she had to have thought we killed her brothers and sisters because they were gone.  What she didn't realize was that they all were safely back into the house.


Here she is before we brought her into the house. 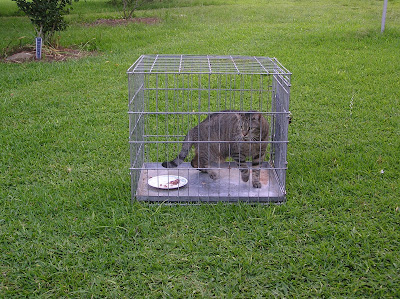 We had this cage in the MH, and left the door open.  She had come out from under the bed and into the front of the MH.  We blocked her path with this cage and the open door.  I scooted her towards it with a fly swatter.  She had no where else to go and finally got inside the cage, and Al quickly shut the door.  She fought like crazy for a minute and we were afraid she was going to hurt herself.  We quickly loaded her on the golf cart and took her inside.   Finally.

BTW....she got her name because when we found her she was producing milk and wouldn't stop.  The vet said something must have happened to her kittens but she didn't stop producing milk.  Her little "breasts" were so swollen that the hair was gone, and they were very shiny and hot.  Each one was the size of a small orange!  She was so sick that we were able to catch her.  The vet gave her an injection to stop the milk production, but it didn't work, so the only option was to spay her, even though it was risky in her condition.     So now you know why she became Dolly Parton!

Tomorrow, I am going to give the other cat, "Medium" some tranquilizer and drug him up real good!  Now that he's the only one there, I can do that.  I wonder what he's feeling now that we "killed" another one of his friends :(       Poor Guy.

Keep the suggestions coming everybody.

Karen, thanks for the sardine idea.  We actually used a very strong tuna cat food in the live trap, and someone got inside, ate the food and was able to escape.  These are both pretty large kitties and I'm wondering if when he/she got in the cage, their back end was sticking out and that prevented the door from closing properly.  Dolly weighs 14.5 pounds and Medium is quite a bit bigger, but I don't know how much he weights.  Dolly actually let me pick her up a few weeks ago and I was able to weigh her.  I doubt that will happen again, anytime soon!