Yesterday, my plan was to rest, do some housework and laundry.  Al’s plan was to go kayaking.

So…we headed out to calm seas, with an incoming tide, and clear blue skies.

We were looking for little ledges where the fish like to hide.

We could see lots of pretty Starfish on the bottom.  Al picked up one for a photo op. 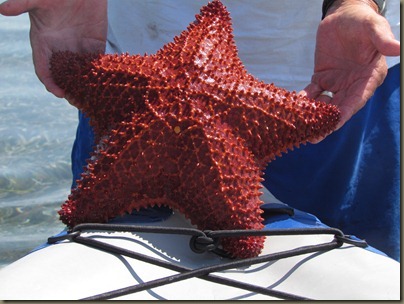 We discovered a little ledge with an undercut.  This is the perfect place for fish to hide, so we went over to check it out.

Guess what we found? 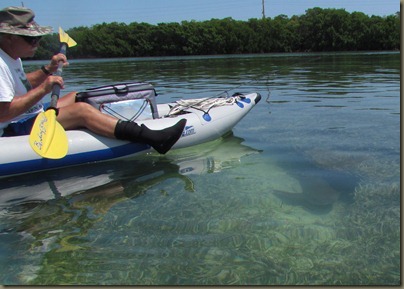 It was a little (5-6 foot)  nurse shark.  The first time we saw him I had a good opportunity for a picture, but I had my camera in my dry bag.

Every time we would see him, I’d attempt to get a picture and he’d quickly dart off.

He always came back to one of his three holes, so we knew where to find him.  He became known as Three Hole Harry. 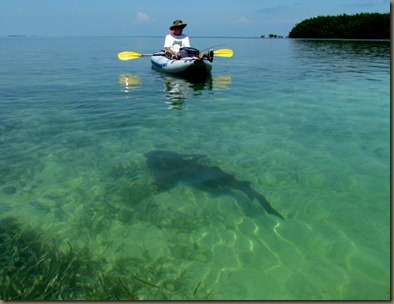 We felt kind of sorry for him, so we left him alone….but we will always know where to find him again.   After seeing us a few times, he recognized the kayaks and got scared off real quickly.  My first sight of him was my best opportunity for a photo and I blew it.

Nurse sharks are very docile and can normally be found hiding under a ledge.  They are one of the few sharks that I’m not afraid of.  However, because they hide under ledges and are not aggressive, they are pestered a lot by inconsiderate divers.  They are also the shark that bites more people than any other shark.  Most of it is probably justified.

We never harass them and always give them their space.  They always take off if a diver gets too close.  Just don’t grab their tail or something stupid.

One time many years ago, I was scuba diving with Al and our friend Wally.  I came across a huge Nurse Shark laying underneath a ledge.  I went  to get Al to show him and when we came back, I was shocked to see Wally right under that same ledge with that huge shark.  I tapped Wally’s shoulder and pointed to the shark in the ledge.  I’ll never forget the look on his face when he realized that huge “wall” he was looking at was actually a shark!  It was so big he didn’t even see it.  Needless to say, he backed right out of there!

Anyway after bothering Harry for a while we paddled around a little more.

Al did some snorkeling (in another area) and found a little Sea Urchin. 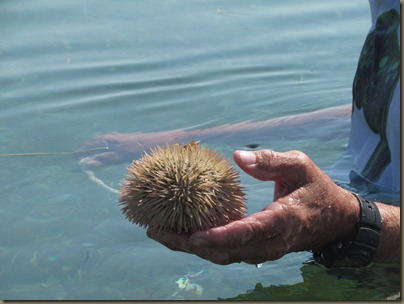 The spikes on the urchin protect them from predators.  Underneath the spikes  is a hollow shell that is very pretty…but also very fragile.  I’ve seen a lot of them in shell shops.

The Florida Keys is known to have the only living coral reef in the United States.  Unfortunately, the coral is dying in a lot of areas.  It’s due to many things, and one thing is people.  Two years ago it was damaged by cold weather.

The coral reefs are offshore a few miles but in healthier times you could see coral inshore where we are.  Now mostly all you see is grass, rocks, crab and lobster traps and sponges.

I was shocked to discover a little grassy area right off from Sunshine Key beach, that was covered with new coral.

I took a few pictures of it from the kayak, but didn’t want to get into the water and  stand on it to take better pictures.  It was coral though, I am sure. 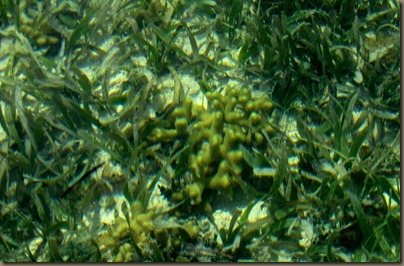 We were getting tired after a few hours and were about ready to head in, when I saw a bird flying into the mangroves.   Hummm….it looked pink.

Could it be a Roseate Spoonbill?

Yes, it was.  I actually saw three of them but the other two flew away and I could only get this guy.

He was a LONG way away and I had a difficult time holding my camera steady enough, with my lens zoomed out to the max, in a rocking kayak! 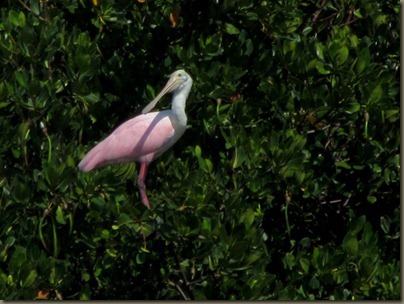 After I shot a few pictures, we headed back to shore.  We were a long way from our beach and  we were getting tired.

Once we got back home, I finally got to wash our sheets.  We threw a turkey breast in the Nu-Wave oven, ate  dinner, watched a little tv and hit the clean sheets!  It was another long and tiring day.

But….it was another very good day. 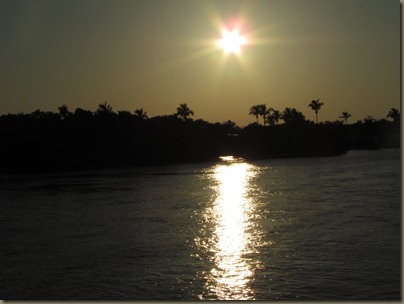