We survived the storms just fine.  It rained off and on most of Saturday, but the winds weren’t bad at all and we got very little thunder and lightning.

This morning I checked my weather App on my Droid phone (Weatherbug) and found we were in a tornado watch.  The weather radio did not pick it up, for some reason.  That would have freaked me out but in looking at the radar, I saw no rain or storms nearby.

The problem with this area is the entire Florida Keys are in Monroe County and that goes from Key West all the way up to Key Largo, which is 120 miles.  I think the weather that triggered the alert was nearer to Key Largo.  We had clear skies and minimal winds.

We are planning to leave the Keys today and head to Naples….(sigh),  but first we want to make sure the bad weather is gone from the mainland too.  Central Florida had a lot of rain and lightening overnight and there is no sense in looking for trouble.

We normally stop in the Everglades at Midway Campground but we thought it might be a bit muddy, so we’re going to stay at a Passport America park right off Interstate 75.  It’s nice the snowbirds are gone, so we have no worries about getting a site!

In reading Kevin and Ruth's blog they were going back to where they were on this day during the past years.  That got me to thinking.

In April of 2010 we had just spent a week at Keaton Beach (gulf coast of Florida) and were getting some modifications done on the motorhome. We got our TPMS (tire pressure monitoring system) and our wonderful Bed in a Box memory foam mattress.  We still love it and still have no indentations in it…which was a worry when we bought it.

April of  2011 brought us back to Georgia after we got a contract on the house.  We spent the month seriously purging and having garage sales.  We had sales every week-end for over 2 months.  Our birds were busy having new families, the flowers were blooming, and we had a visit from blogger friends John and Carol.  It was a very busy month as the closing date was originally to be May 6th!  We would have never made it…thank goodness there were delays!

And this April brought us to the Florida Keys.  Who would have thunk it?

We have had a wonderful month here in the Keys and would stay longer if we could.  In fact, I think I might never leave, if it wasn’t for the hot weather and hurricanes!

Al is still on his boat kick and he’s starting to get my attention.  I love boats and we have had boats all of our married life.  In fact we bought our first boat before we got married.  We decided to buy a boat, instead of spending a ton of money on a honeymoon.  We took our “new” boat and the two cats and spent our honeymoon at the Lake of the Ozarks,  in a little cabin right on the lake.    I guess looking back, that was kind of our first “camping” trip.  Although we didn’t have an rv or a tent, we loved being out in the woods.

Al has been scouring Craig's List for just the right boat.  The problem is, our little truck won’t tow a very large boat and I am not going to follow along behind him towing the boat while he drives the motorhome.  Part of the fun of fulltiming, is traveling together.  So…..if we were to get a boat, it would probably have to live in the Keys and we’d only be able to use it while we were here.  It sure would be nice to have a boat while we were here though.  Yeah…he’s wearing me down! 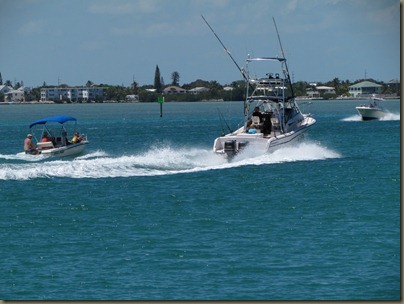