We decided to try an experiment this morning and see if the sun would actually rise if we weren’t there to see it.

After we drank coffee and read blogs, we took a walk over the bridge that leads to the beach.  The bridge goes over the inter-coastal waterway, so it needs to be high enough to allow large boats travel under. We thought it would be good exercise and be able to check out the beautiful view.    It’s a 2 mile walk over and back.  There was a  park by the bridge where we could park the car.

There was a nice little trail to the bridge. 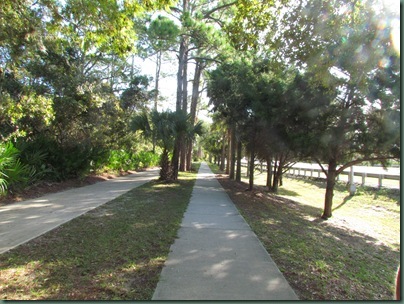 The bridge had a nice little walking path where you were protected from the cars.  It was quite a nice walk. 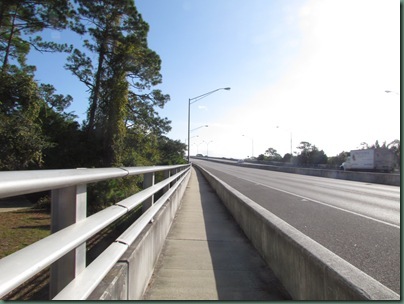 It was pretty high…thought it might kill us walking to the top, but it actually wasn’t too bad. 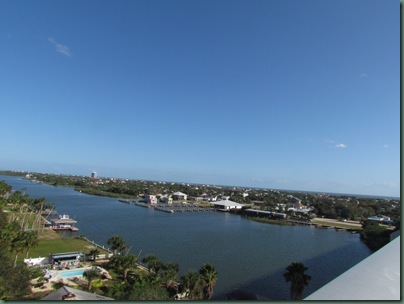 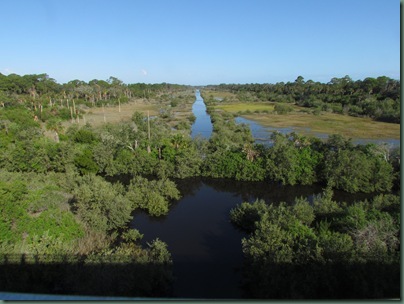 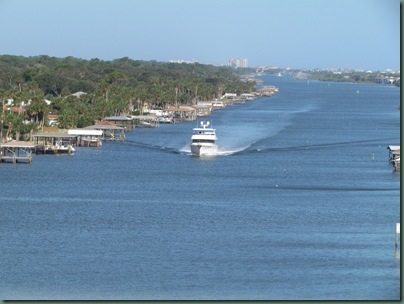 We have been trying to finalize some plans for the winter.  One thing about spending the winter in Florida, is that you need to have some sort of game plan.  We prefer to go where the mood takes us, but that’s not always a good plan in the winter in Florida.  There are way too many snowbirds here and if you don’t make reservations, you can be out of luck.

So, as of right now, we’ll be going back to Sweetwater Rv Park in Zephyrhills when we go back to Tampa later this month.  It will be a good base camp for the winter, but we still plan to make other trips from there.

I made reservations for after Thanksgiving for 2 weeks at a Thousand Trails “max pass” in Fort Myers.  It’s about 100 miles south of Tampa on the gulf coast.  It’s a very pretty area with beautiful white sandy beaches.

When we get back from there it will almost be time to head to Hillsborough River State Park where we’ll spend Christmas.  Sweetwater will be our “home” and we will just go ahead and pay for three months and lock in the monthly rate.  We won’t be there all three months, but it’s cheaper than paying the weekly rates.  At least we will have a nice site to stay and a home to come back to.

Apparently, with Thousand Trails, we can’t make reservations further away than through the end of December.  I guess I’ll have to wait until next month to make plans/reservations for January.  We really like this camping membership and hope they will continue to offer the Max Pass membership next year.  Without that, we would only have 3 campgrounds here in Florida and it probably wouldn’t be worth it to us.

We haven’t decided what we will do tomorrow, but we have our week-end planned.

On Saturday we will go to the Jacksonville Naval Air Station for their air show.  The Blue Angels will be performing and we love watching them and the Thunderbirds.  I actually prefer the Thunderbirds (Air Force).  It may be  because I’m an air force “brat.”   Actually, Al is too.

On Sunday we plan to head down to Palm Coast for the Seafood Festival.  It’s not my favorite thing, but Al wants to go, so I guess I’ll have to go.

We’ll be leaving Flagler Beach next Wednesday and we are trying to find some alternatives if we can’t get into Blue Springs State Park.  We have three “plan B” parks.  There are plenty of spaces in the state parks during the week, but they are full on the week-ends.