The high is predicted to be 89 degrees today, but thankfully tomorrow it will cool down again.

We had such a fun and different day on Friday.  We went to nearby Hiawassee, for the Georgia Mountain Fair.  It certainly wasn’t like the state fair or Strawberry Festival we have in the Tampa area.  It was what a fair should be.  Less commercial and more history.

Parking was free, which is unheard of in Florida.  The entrance fee was $12 a person, but that included entrance into the concerts.  The fair lasted a week and they had different entertainment every day.  When we heard country singer John Berry was playing, we decided to go.

We started off walking around the grounds. There were craftsmen selling their wares in little buildings.  No junky flea market things, just beautiful handcrafted items.  One couple sold wood carvings.  He did the carving and she did the painting.  She was working on painting a beautiful loon.  I thought of Sherry and her love of loons.  I have never seen one but it turns out that there are loons nearby, so I guess I’ll finally get to see one.  I would have loved to have bought the loon she was painting.  The detail work was amazing.

There were also some interesting displays.  We particularly liked the one of the boy splitting wood.  It was interesting to see how it was done and how thin and straight he could split them. 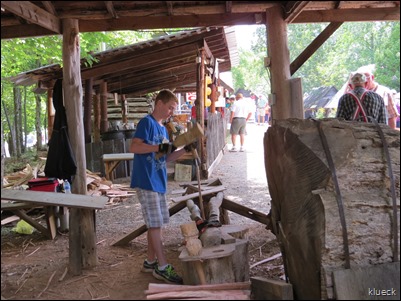 This guy was demonstrating how they grind corn, husk and all to make feed for livestock. 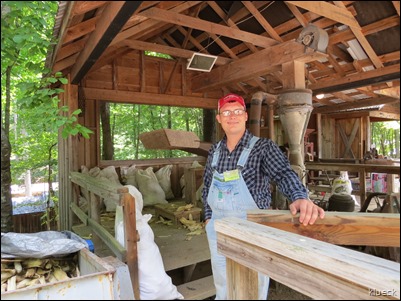 The fairgrounds is on a large lake and they had a working grist mill set up. 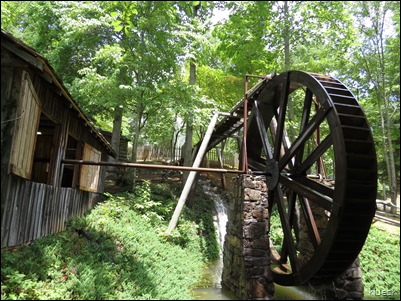 The next picture is a box showing the 4 stages of corn. The first compartment was corn kernels. After the first grinding, the flour becomes grits, then corn meal, then  corn flour.  You could actually touch it at each stage.  I found it interesting and learned something new. 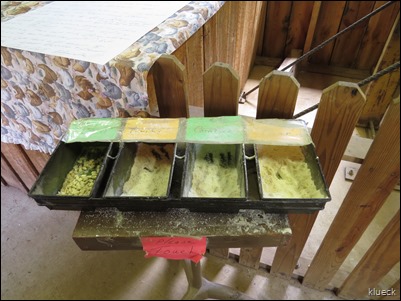 We also toured an old homestead.  Terry and Ralph were with us. 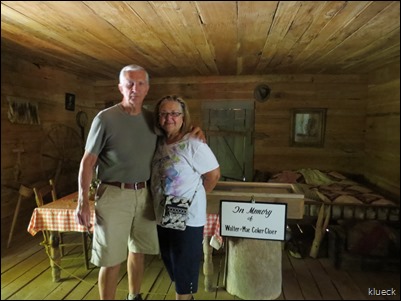 There was a huge building full of every sort of old machine you could imagine, and many I could have never imagined.

Al knew just what this was from his days on his grandparents farm in Jamestown, North Dakota.

Here he is in front of a manure spreader. 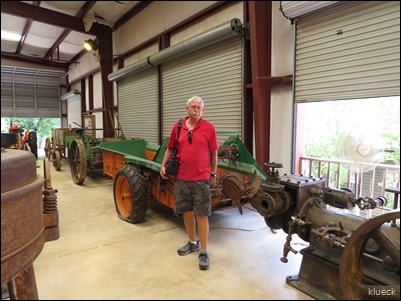 Check out this old wheel chair.  Notice how it can be reclined? 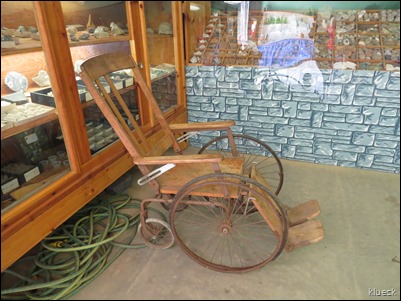 Anybody care to guess what this was used for?   No, it was not for torture, but it might as well have been. 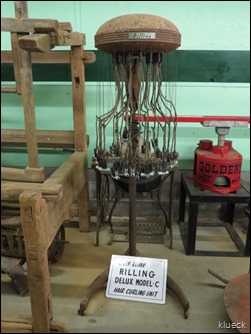 It was fun looking at all these old machines.  If we had known there was so many interesting things to see, we would have started earlier, but we had to cut it short to make the concerts. 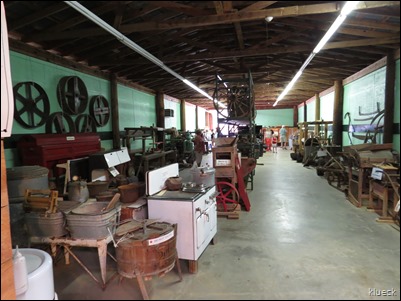 We weren’t really sure how the concert worked.  Would there be enough seats for everybody?  Should we get there early to make sure we had a good seat?

The first show started at 2 pm with the house band. The building was air conditioned and rows of padded bench seats.  We got there just after 2 pm and found plenty of available seating.  There were folding chairs up front with about half of them available.   We wondered if those were reserved seats, but found out later they were available because they were hard.

The house band was very good and we enjoyed them but we really, really enjoyed John Berry.

We ran into 6 other people we knew from Rivers Edge….what a surprise that was.

We had really good seats. 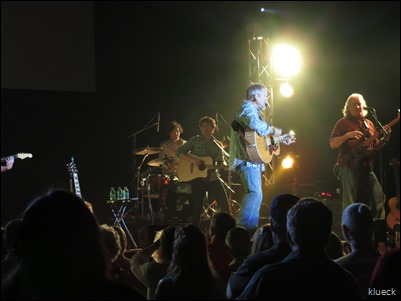 Of course with my zoom on my camera, I got some really close up shots. 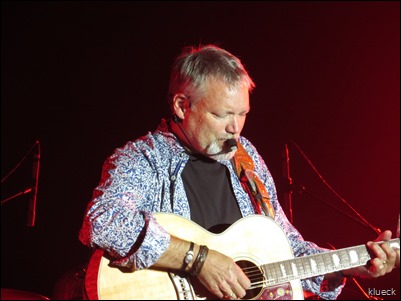 He played with the band for a while, then sang by himself. He has an amazing voice.

Then he talked and told stories for awhile.  We learned that his wife was in the band. 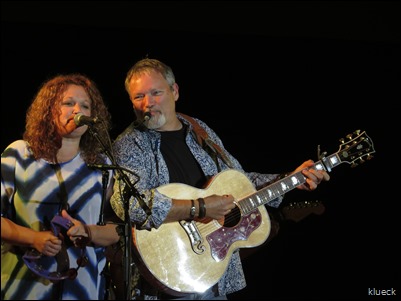 One  son was the drummer in the band, and the other one is trying to get a record deal and sang a song for us.

John is on his way to Nashville because he just got a new record deal.  We’ll be watching for that.

He put on a great show, with a nice combination of music and stories.  He did an encore song that brought everyone to their feet.  It was the Percy Sledge song, “When a Man loves a Woman.”  Wow.  That man can sing and hold a note!

We thoroughly enjoyed the concert and left feeling we knew him.

I posted something about the concert on Facebook and he actually saw it and “liked” it.  I thought that was pretty cool.

After the concert, we strolled around the fairgrounds for a few more hours.

Alpaca farming is pretty popular around here and we met these two beauties. 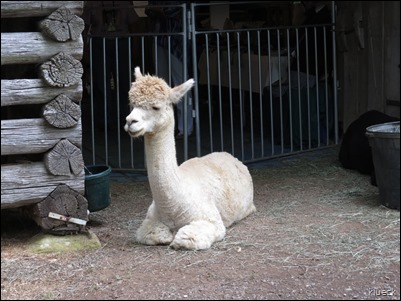 Check out those lips. 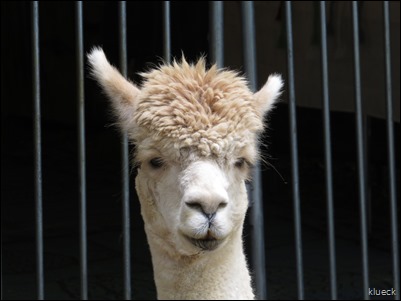 This guy looks like he had been on a binge. 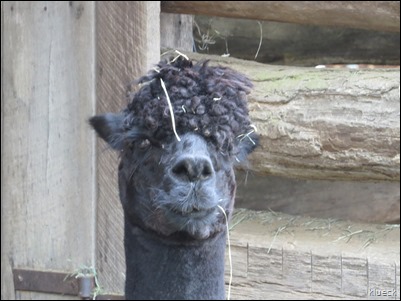 When we left, we discovered they have a nice campground with some beautiful lakefront sites. 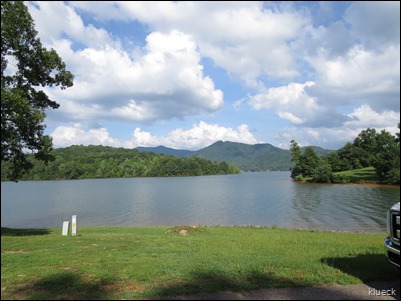 They were nice full hook-up sites but were a bit narrow with not much margin for error. 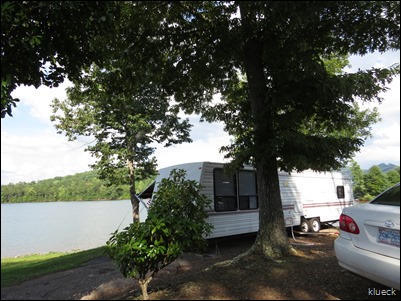 We’ve been keeping busy around here.  Our friends Terry and Ralph will be leaving soon.  They like it here and are considering buying a lot, so maybe we’ll end up being neighbors.

We’ve been “bear hunting” every night, but so far no one has spotted the bear.