We have had a busy week and I’m a little behind on my blog.

The cold front that moved across the mainland, managed to make it’s way all the way down to Key West, bringing cooler temperatures and strong winds. Windy days are typical for March, so I guess we’ll have to skip boating until the winds die down.

We got an email the other day from bloggers Rick and Kathy.  They are staying here in the Keys in nearby Summerland Key, and wanted to get together.  We suggested a late lunch at Geiger Key Marina.  We turned them on to hogfish and now I think we have two new converts.

As usual, with other Rv’ers, we had no problem with conversation and before we knew it, a few hours had passed.  We had a nice lunch, despite the worst waitress ever.

Rick and Kathy are very nice folks and we enjoyed meeting them and getting to know them in person.  See ya down the road guys! 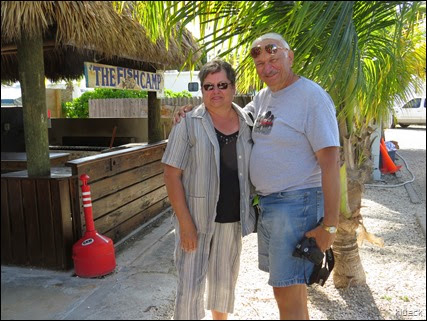 Yesterday was a big day for us, when we closed on our new RV lot here in the Keys.  It’s on Cudjoe Key, and in Venture Out Resort.  Our lot is actually on Summer Place.  How funny, since it’s going to be our winter place!

We are official land owners in the Florida Keys.   It’s a mighty small piece of land, but it’s all ours!

Everything in the Keys is measured by mile markers, with the furthest southern point being Key West at mile marker 0.  Our new lot is at milemarker 23, which is 23 miles from the southernmost point in the United States.

After closing, the first thing we did was go to the library and get a new library card.  We seem to find plenty of free books at the campgrounds, but we still always like having access to a library when we can.

After the library, we went down to Venture Out to get signed in.  We had to bring our closing paperwork to prove we own a lot since it’s a gated park.  We got our entry sticker and now can get in and out without our Realtors help.

Our plan for closing day was to bring our swimsuits and spend some time in the saltwater pool and hot tub, and  sit by the water under the shade of a palm tree and do a little reading. The waterfront view is spectacular and since we can’t stay on our new site until our renters leave the first of next month, we at least wanted to enjoy the park a little.

Unfortunately, the wind was strong and blowing right off the ocean, so it felt pretty chilly.  It was not a good day for outdoor activities.

We decided to go to “plan b” and try out one of the local recommended restaurants for lunch.  We ate at the Square Grouper, and what a good recommendation that was.  It’s  the first time we’ve been to a restaurant with  cloth napkins for a looong time!   When we walked in, we were surprised there was a wait to be seated.  The lady in front of us was surprised as well, until she realized and said out loud, “it’s windy.”  Yep, when it’s windy in the Keys, no one is on the water and every place is more crowded than normal!   Only in the Keys!

We had the Friday special of Philly Cheese Steak sandwich (not very vegan ) but wow….was it good!   I’m still thinking about that meal, and we can’t wait to go back and try some of their other entrees.  The Friday special was $9 and included, fries, cole slaw and either beer or soft drink.  Al liked that!  Although we didn’t eat vegan yesterday, we could have easily, as they had several vegan choices, including a Portobello sandwich, and very nice salads.  We’ll definitely go back.

After lunch, we made a few stops, then went back home, took a short nap and watched a little TV.

Later on, we decided to head back “downtown” to BoonDocks Grill and Drafthouse for happy hour.  It was the first time we had been there, and what a fun place it was.  They have entertainment every night, and last night local celebrity Howard Livingston and his band were playing.

Last week-end they had a group called the Mo-Towners.  We heard they were great and we were sorry we missed them.  This week-end there is a Beatles Tribute band, so I think we’ll go back for that.   The food looked and smelled good, although we didn’t need to eat after our big lunch.

Our next stop was back to Venture Out.  We had never seen the park at night.

It was pretty….but very, very windy, so we didn’t stay long.

The full moon was pretty over the water. 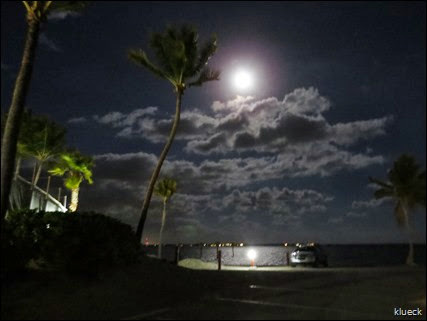 and here is MY catch of the day! 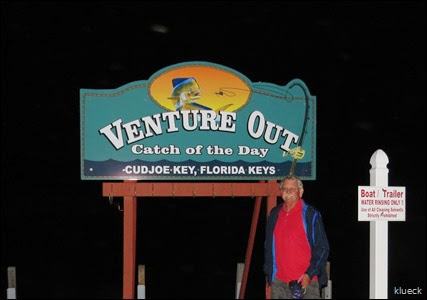 It’s windy again today, so I’m not sure what we’ll be doing.  Probably not going out in the boat!