Econfina Creek is in the northwest part of Florida. You take Interstate 10 to US 231 south.
We made a day trip to this beautiful river on July 12, 2009. We had discovered this river while on a camping trip to Florida Caverns State Park.
We found a kayak livery that would pick us up for $15. That was the fee for launching 2 kayaks and pick-up one person. I stayed with the kayaks and Al rode back to the truck, then drove back to pick up me and the boats.

They lady at the kayak livery told us that is was an easy 7 mile run downstream. Our kayak book said it was not a beginners run so I specifically asked about this. We decided to use the livery service as opposed to our normal practice of paddling upstream and then floating back to our put in spot. There is another launch area in a little park just a little ways downstream. You can drive your car down fairly close to the river but then there is a boardwalk you have to haul your kayaks down. We didn’t have our little carts to trailer the kayaks, and didn’t want to haul 2 kayaks and all the stuff, so we chose the livery.
We put in and immediately noticed what a beautiful river it was. It reminded me of Juniper Springs Run, that is pictured on the first page of this blog. The water varies from shades of gold to a reddish color. It isn’t quite as red as Juniper Springs Run, but it was beautiful. 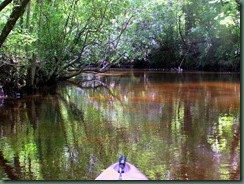 There are several beautiful springs along the way with crystal clear blue water. 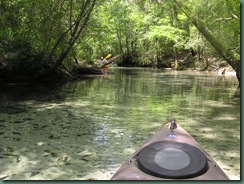 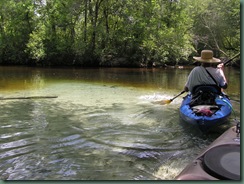 There are numerous places that are popular swimming/playing areas where the water is turquoise blue and beautiful. Unfortunately we were there on a Sunday and they were packed with people. We just floated right on by. 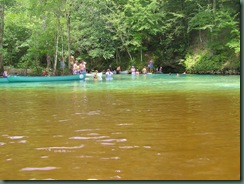 We’ll come back on a week-day after school get back in.

This easy float was definitely NOT easy. The current was ripping and there were a lot of trees and stumps in the river. I would get busy taking a photo and end up heading straight for a submerged stump. I nearly was flipped over twice! I finally decided to pay more attention to where I was going and take fewer pictures. Most rivers we have paddled downstream require only an occasional dip of the paddle to keep you pointed in the right direction. That was not the case with this river. You had to paddle as hard downstream avoiding trees, stumps and the opposite bank, as you normally have to paddle upstream on a fast moving river. It was work and we were out of shape since we hadn’t paddled a lot recently.

I brought my handheld Garmin GPS with us and it said we made a nearly 10 mile trip. I don’t know where they get 7 miles, unless it was as the crow flies.

They told us at the livery to meet them at the 2nd bridge. They make their first pick up at 2pm. We found the first bridge pretty quickly and figured the second would be a large bridge that would be easily visible.

At about 4.5 miles I started watching for the bridge. We were hot and getting a little tired. We kept watching and watching… but no bridge. There were no other canoe’s around and very few houses. We were beginning to think we had missed the bridge. How could we miss a bridge? We didn’t think we had, but when we were still not there around 9 miles we were starting to worry. We finally came across a group of canoe’s that had been rented from the livery service. At least if we had all missed the bridge, they would be looking for them, if not us!

One thing I didn’t like about the livery service was they told us if we weren’t at the bridge by 6pm they would NOT be looking for us. I though this was very irresponsible. Evidently they wouldn’t even bother to notify the police we were missing. Good business practice??

We liked the river a lot, but the next time we will put in at the little park down stream, kayak a little further down to the springs and then back up river to the park.

After our 10 mile float we had to wait 40 minutes or so for the pickup. Al left with the boats and I waited with an older man who say there and collected aluminum cans. He seemed harmless enough but while we were waiting for the truck, he started getting out black plastic garbage bags and getting them opened up. I wondered if he planned on killing me and putting the parts in the bags??? I decided he was harmless and when Al left I felt comfortable. Shortly after a few more canoe’s came in to wait for pick up.

All in all we had a nice day but it was definitely one of the harder paddles we have done and it was DOWN stream. 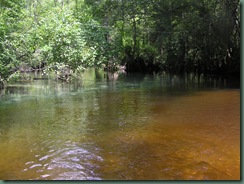 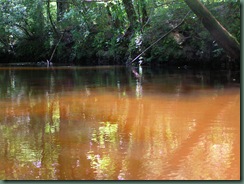 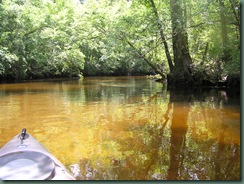 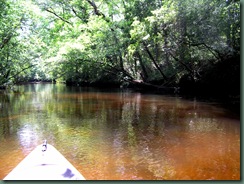 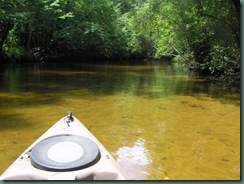